Perhaps the broadest nature of Foucault’s project can be summarized as an attempt to make us aware of the contingent nature of familiar and seemingly universal concepts.  The entire body of human sciences has historical antecedents which revolve rather predictably upon a very distinctive concept of the human subject.  Just as Foucault urges us to ask by what processes and under what conditions statements are made and taken to be meaningful, we can probe the processes and conditions by which subjects are made and taken to be selves.  Foucault writes: “The establishment of a complete oeuvre presupposes a number of choices that are difficult to justify or even to formulate.”

Strangely, so is the establishment of the self.

A scribbled confession, someone’s name on a napkin, the sketch of a profile – these are the unintended, unofficial statements of self which are excluded from the oeuvre of the self as unjustifiable and illegitimate, like bastard children.  The unity of an oeuvre, Foucault explains, is not given.  It is “the result of an operation.” Well, of course.  When the indomitable Thomas Cromwell arrives at the court of Henry VIII, he arranges his face.  He is suppliant, amenable, and this is not hypocrisy.  The face that he has arranged “can be regarded neither as an immediate unity, nor as a certain unity, nor as a homogenous unity.”  It is, perhaps, a strategic unity.

Whether deliberate or otherwise, the unity resulting from an operation delimits the edges of the oeuvre of the self.  Oeuvres are not stable objects but are situated in networks, and the meaning of an oeuvre is not found in its implicit and secret nature, but develops as a consequence of its location within a network.  The categories for such networks are continually shifting – upon what basis do such categories emerge?  If something is said at all and is constituted as meaningful, it is only because it emerges on a field in terms of which it makes sense – perhaps it is these very terms which constitute discursive formations.

Shakespeare famously declared that “All the world’s a stage,/ And all the men and women merely players;/ They have their exits and their entrances,/ And one man in his time plays many parts.”  In other words, we are ourselves only inasmuch as there is a stage for us to be on.  Indeed, our very status as players, as individuals, as subjects, is discursively conferred upon us.  We are not individuals a priori and continuously, but a posteriori and discontinuously.  Our being is not composed of unities, but by systems of dispersion – our exits and our entrances, our many parts.  As objects of discourse, roles are defined by exterior relations, not interior properties.

Shakespeare’s characters are not to be sought in the biographies of actors, but in the relations among costumes, props, scenery, exits stage right, and the anonymity which allows replacement by an understudy.  In an unexpected way, this analysis is nearly Kantian: we encounter an object as the object that it is only inasmuch as we have categories in which to experience it as such.  This ought to imply that anything which is within the bounds of such categories is a possibility of experience.  Yet this is not so.

Tantalizingly, Foucault introduces the mystery that there are many statements which are grammatically and logically acceptable but which are never, ever uttered.  There are many roles which are not acted, realized, or even scripted.  Obviously, there are rules besides logic and grammar – epistemic rules, perhaps – which delimit the possibility of what can be said, acted, or even thought. 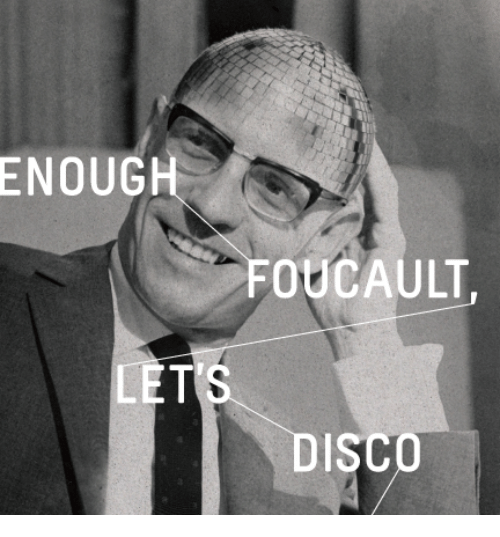