Among its many other virtues, history unifies.  A shared, agreed-upon past reassures us that we are exactly where we should be, indeed, where we must inevitably be, because things couldn’t have and ought not have happened any other way.

Sargon of Akkad, who unified Mesopotamia by creating the very first empire in the 23rd century BC, became a beloved legend, celebrated as the greatest man who had ever lived.  Just as he unified, the historical vision of his achievements was unifying.

But if you read enough Foucault, you’ll see that this historical approach, too, has a history.  This method achieves historical continuity by means of recollection which proceeds by conscious forgetting, a way of speaking which insists on silence, a list characterized by what’s unlisted.

But what if the wild, wandering, tribal Amorites, whom Sargon subjugated, or the Elamite dynasty, whose land he conquered, had left us their memories of the Akkadian empire’s earliest days?  Would we hear lament, stories of violent resistance, political denunciation?  Would it change our reception of Sargon of Akkad?  Significantly, what would happen to the narrative continuity of the first empire’s development?  Counter-history, it seems, functions as memory which disrupts shared memory.

This is because every conqueror presupposes a conquered, every victory a defeat, and every acquired territory a lost homeland.  What’s forgotten is not only an object of knowledge, but a source of knowledge.  These knowledges themselves can smear on war paint to do battle with sovereign history, and with the rise of modernity in the seventeenth century, they do just that. It is not entirely clear if counter-history has always existed in silent, shadowy forms as the illegitimate progeny of sovereign right and only struggled into the light in the seventeenth century, or if it came into existence at that later date. In speaking at all, however, counter-history commits an act of aggression.

However, if history proper has traditionally been a legitimizer and intensifier of power, it seems reasonable to suppose that history improper has always seethed and simmered beneath the cool façade of sovereign right. In other words, this must mean that as long as history has existed, it has dutifully concealed subjugated knowledges of the oppressed and conquered. Furthermore, this act of continuous, permanent concealment and subjection implies history’s self-awareness of itself as unjustifiable on its own terms.

History, then, has existed as a question which it dared not ask.

“Today when a revulsion against war is normal, the usual commercialite would be inclined to depict Alexander as a Fag Villain Killer, but… it needs to be borne in mind today that not till more than a century later did a handful of philosophers even start to question the morality of war.”

Aside from the complacency of ethnocentrism which Vidal aptly points out, it’s jarring to even consider that the great justificatory battle which sovereign history deploys against subjugated knowledges may, for the likes of Alexander, not have existed at all. 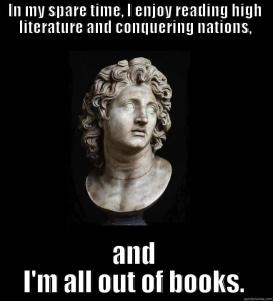 The conqueror was not the guardian or recipient of any conqueror’s right because there was simply no such question. Alexander, who doubtless regarded himself just as modern and forward-thinking as we do ourselves, was doing what any man in his position would have done. If we could ask how he justifies his slaughters, it is likely that he would raise bewildered eyes and ask us what we mean.

Much later, with military tacticians such as Caesar and eventually Napoleon, history’s self-awareness as the defender of sovereign privilege and the right of conquest becomes more clear. Napoleon was extraordinarily conscious of his unique, singular position as brilliant strategist and conqueror, and certainly did not think that what he did was what anyone else in his position would have done. Only he, only a Napoleon or a Caesar, has such valor and ability and therefore is privy to the right and privilege which are for Napoleons and Caesars to enjoy.

I’m suggesting, rather less tentatively than perhaps I should be, that perhaps not only was the violence of conquest once a democratic, egalitarian phenomenon, natural and inevitable for anyone, but that it did not take the form of struggle between sovereign and subjugated truth. For example, Plato argues in the Republic that a victory of some over others, even in the name of peace, dissolves society, which must be founded on cooperation of one thriving social organism, utterly rejecting the Hobbesian notion of subjects voluntarily submitting to rulers, and explicitly denying the validity of conquest.  So, before counter-history challenged sovereign right in 1630 in the name of a more just past achievable through revolution, the status quo of ancient Greece rejected it outright. 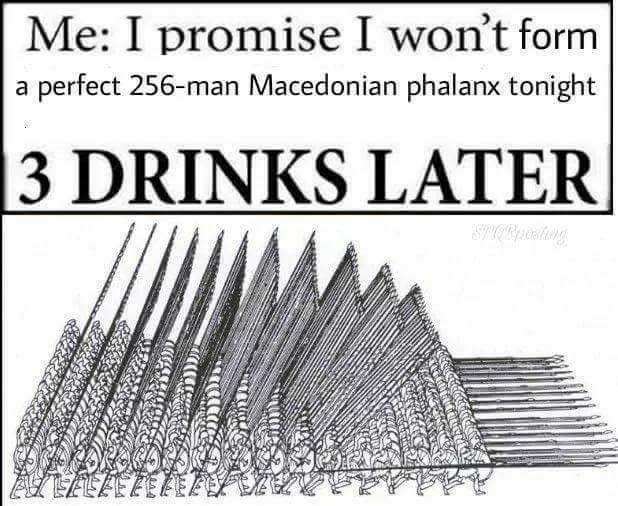 When Sarpedon tells Glaucus that in battle they either win glory for themselves or yield it to other men, it’s not just a reiteration of the heroic code, but also a historical description: the ancients either conquered or were conquered.  It’s a cool, unsentimental truth, as implacable as a law of nature: today it’s us, tomorrow it’s them.  The vanquished, in another year or mood, may well become the conquerors, and this insight is precisely why Sparta maintained such rigorous control over the helots.  Anyone’s city might be sacked and burned, the doomed men killed, the wretched women and children enslaved — this roulette had nothing to do with “natural right,” skin color, or ethnicity.  If you had this opportunity for conquest and violence, you seized it.  If you didn’t seize it, it just meant you weren’t powerful enough.  It was a time of conquerors and possibilities of conquerors, nothing more.

History’s self-reflexive self-idenitification as ruse, as illusion, as a struggle with counter-history, is itself a historical phenomenon the origins of which are perhaps traceable to a time when violent conquest first began to grope about for a mask.

One thought on “Do You Even History?”