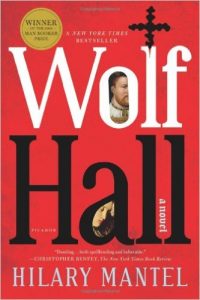 While I read Hilary Mantel’s Wolf Hall, everything else was uninteresting.  After all, here was heresy, plague, intrigue, murder, lust, betrayal – in short, England in the 1530s – all between two crumbling covers (by the time I’m finished with books, they’ve fallen to pieces, since I bring them everywhere, fold pages, and shamelessly write all over the margins).

However, it wasn’t only the dramadramadrama which gripped me.  It was also Mantel’s masterful portrait of Thomas Cromwell.

In his forties, rings on his fingers, wary, articulate, erudite, having been a mercenary, a lawyer, and a merchant, having seen too much to be trusting yet too wise to be cynical, able to recite the New Testament in Latin, Cromwell as chief advisor to Henry VIII contains multitudes and is one of the most nuanced characters in contemporary fiction:

“His speech is low and rapid, his manner assured; he is at home in courtroom or waterfront, bishop’s palace or inn yard. He can draft a contract, train a falcon, draw a map, stop a street fight, furnish a house and fix a jury. He will quote you a nice point in the old authors, from Plato to Plautus and back again. He knows new poetry, and can say it in Italian. He works all hours, first up and last to bed. He makes money and he spends it. He will take a bet on anything.” 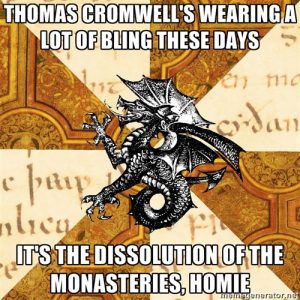 In short, if you’re a man, you want to be him.  If you’re a woman, you’ve fallen desperately in love.  Even though the novel is set in the turbulent and brutal time of England’s break with Rome, replete with public executions and sweating sickness, it remains deeply human and, what’s more significant and difficult to pull off, humane. 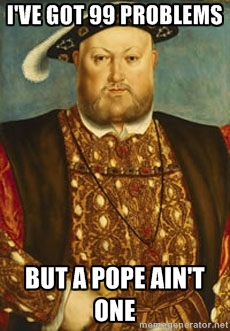 Cromwell, whom history came to criticize as a despotic boor, isn’t all coolness and toughness.  Despite his morally ambivalent, if not downright amoral, context, he’s tender and his self-respect extends to others.  Whether the historical Cromwell matched this description or not is really beside the point.  This isn’t history, and if it is, Mantel is re-writing it.  For the purposes of reading and appreciating good books, things like facts, dates, and the looming shadow of What Really Happened, are simply the raw material from which the writer makes meaning.  The point isn’t to re-create the perspective of a king’s minister in the 16th century so we can live through him.  What’s important is how the writer appropriates history and establishes it into contemporary culture.  What’s crucial is what it can, and does, mean to us now.

Anyway, Mantel doesn’t simply write about a time period, or even about Thomas Cromwell; both worthy, but narrowly defined, subjects.  For me, the novel is about a large and roaming consciousness which self-reflexively filters and re-interprets some of Western history’s defining moments with great moral sensitivity and depth, and which begins in Mantel, moves through Cromwell, and ends in us.