I don’t like James Joyce as much as I ought to.  It might be because he’s too earthly, too real, too human.  Every time his language lifts me into the sky, he’ll say something ordinary or mundane or cheap and I’m back on the ground, wondering why he bothered. But that’s just how humanity is, right?  Alternately ennobling and degrading itself.

Anyway, the Portrait of the Artist as a Young Man contains a very, very, very insightful conversation between Stephen Dedalus and his friend, Lynch.  They’re talking about art and beauty, and it’s cold, and they’re smoking, and I’ve often flipped the book to that chapter to follow them along foggy and curving paths, waiting for my turn to speak. 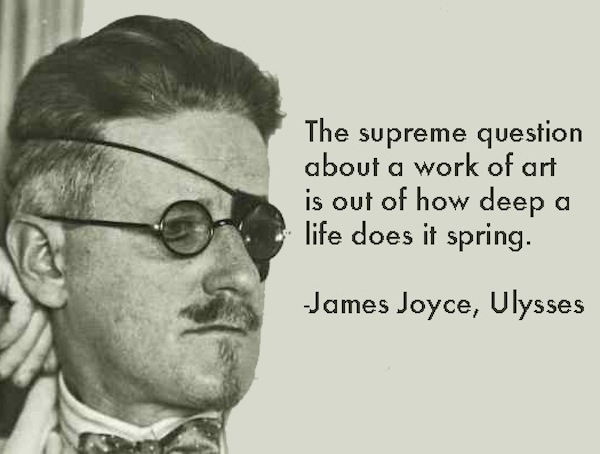 For Stephen, pity and terror are the essence of “proper art” because they are what he terms “static” emotions: “You see I use the word arrest.  I mean that the tragic emotion is static.”  Static emotions are contrasted with what he terms “kinetic” emotions: “The feelings excited by the improper art are kinetic, desire or loathing.”  Desire and loathing inspire movement toward or movement away from an object; when we desire, we go toward, and when we loathe, we move away.  Such emotions are brought about by the “pornographical or didactic” arts which are improper because they encourage a physical, instinctual, self-aware, response.  Stephen is after the type of art in which the physical and petty self is transcended for the sake of the contemplative self.  Upon achieving stasis, the observer is lifted out of himself and remains suspended in a sort of trance: “The mind is arrested and raised above desire and loathing.”

Lynch, however, is unsatisfied with this explanation, and demands to know just what beauty is.  Stephen returns once again to the notion that the aesthetic experience is static and cognitive, comparing the apprehension of beauty to the apprehension of truth: “…the true and the beautiful are akin.  Truth is beheld by the intellect which is appeased by the most satisfying relations of the intelligible: beauty is beheld by the imagination which is appeased by the most satisfying relations of the sensible.”  We realize that it is within these “satisfying relations” that beauty dwells.  Why is it, Stephen asks, that different cultures all propagate differing versions of female beauty?  Is there an overarching quality that all cultures notice and admire?  Of course, it is possible to go along the route of evolutionary psychology, which suggests that the survival of the species is hiding behind aesthetic understanding, but Stephen dislikes this route because “It leads to eugenics rather than to esthetic.”  The alternative, wherein Stephen begins to define beauty itself, consists of finding “certain relations which satisfy and coincide with the stages themselves of all esthetic apprehension.  These relations of the sensible, visible to you through one form and to me through another, must be therefore the necessary qualities of beauty.”  The apprehension of “relations of the sensible” is what the rhythm of beauty consists of.  Thus, Stephen has posited a profoundly cognitive, almost mathematical, approach to aesthetics insofar as beauty is to be found in particular formal relations of shape and structure, which are perceived by the mind.  There remains to describe how these formal relations correlate to the stages of aesthetic apprehension to achieve an understanding of “the qualities of universal beauty.”

Aquinas’ three prerequisites for beauty, as translated by Stephen, are wholeness, harmony, and radiance, and these prerequisites correspond to the three steps of aesthetic apprehension.  To demonstrate, Stephen asks Lynch to look at a basket.  Stephen tells him that in order to see the basket, one’s mind “first of all separates the basket from the rest of the visible universe which is not the basket… the esthetic image is first luminously apprehended as selfbounded and selfcontained upon the immeasurable background of space or time which is not it.”  In other words, in perceiving, the perceiver selects the aesthetic object, thereby differentiating it from the rest of the world as separate and complete in itself.  This stage of apprehension corresponds to Aquinas’ first requirement of wholeness.  Simple enough. Second, one’s mind perceives the aesthetic object “as balanced part against part within its limits; you feel the rhythm of its structure… You apprehend it as complex, multiple, divisible, separable… harmonious.” The perceiver analyses the separate parts of the aesthetic object and concludes that they are balanced, symmetrical, and congruent with one another.  This second stage of apprehension corresponds to Aquinas’ second requirement of harmony.  So far, the stages of apprehension are almost reminiscent of Hegelian dialectic, although they follow a completely different chronology.  Instead of moving from thesis to antithesis to synthesis, Stephen has the perceiver begin at a synthesis wherein the aesthetic object is apprehended completely, then move to an analysis of its constituent parts.

The final stage of apprehension is not quite as straightforward.  Stephen dismisses the notion that, by “radiance,” Aquinas could have meant a Platonic idealism wherein the aesthetic object is beautiful because it is a shadowy imitation of the transcendent real: “Aquinas uses a term which… would lead you to believe that he had in mind symbolism or idealism, the supreme quality of beauty being a light from some other world, the idea of which the matter is but the shadow, the reality of which  it is but the symbol… But that is literary talk.”  For Stephen, the aesthetic experience is possible only here, on Earth, and the aesthetic object need not depend upon a transcendent realm to be legitimately beautiful.  Radiance is contained within the object, not beyond it, and is approached with the understanding that it “is that thing which it is and no other thing.  The radiance… is the scholastic quidditas, the whatness of a thing.”  Quidditas, or quiddity, is the very essence, or nature, of a thing.  Consequently, the essence of an aesthetic object is that which gives it its radiance.  The third and final stage of aesthetic apprehension is the static, still, moment of revelation when the essence of an aesthetic object is beheld.  Interestingly, we have arrived at yet another synthesis, but of a different kind.  Now, instead of merely seeing the complete form of the object – the “synthesis of immediate perception” – we see its very heart, but this sight must be reached only after perceiving its wholeness and the relations of its parts: “When you have apprehended that basket as one thing and have then analysed it according to its form and apprehended it as a thing you make the only synthesis which is logically and esthetically permissible.  You see that it is that thing which it is and no other thing.”  In this instant, one stands entranced within “the luminous silent stasis of esthetic pleasure, a spiritual state…”

Finally, Stephen describes beauty as it is understood “in the marketplace,” where the image of the aesthetic object is “set between the mind or senses of the artist himself and the mind or senses of others.” Here, Stephen makes the delineation between any perceiver of beauty, and the artist.  The artist, who presumably exists “in the marketplace” because he is a producer, must re-create the tripartite aesthetic experience for an audience.  This re-creation can take three possible forms: “the lyrical form, the form wherein the artist presents his image in immediate relation to himself; the epical form, the form wherein he presents his image in mediate relation to himself and to others; the dramatic form, the form wherein he presents his image in immediate relation to others.”  The lyrical form of art is simply an expression of individual, personal experience, or “the simplest verbal vesture of an instant of emotion.”  The epical form of art expands upon the lyrical; after critical reflection upon himself as the center of an event, the artist distances himself from the event such that its “emotional gravity is equidistant from the artist himself and from others” and the audience, too, may be emotionally affected by it.  The dramatic form of art is achieved when the vitality of the artist grants each fictional character a life of their own until “the personality of the artist… finally refines itself out of existence, impersonalizes itself… The mystery of esthetic like that of material creation is accomplished.” In other words, the artist assumes a godlike role, who ultimately becomes and remains detached from his creation.

One thought on “James Joyce and Aesthetics”