In twelve words:
Lucy doesn’t know what she wants, but then she figures it out. 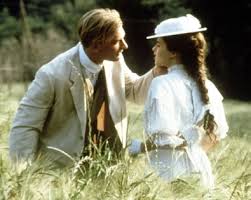 I think:
There’s a reason why Dorothy Parker once said, “Why, I’d go on my hands and knees to get to Forster.” So would I, Dot, so would I. Forster writes oh, so cleverly! With his light touch and excellent timing, this novel is young and spring-like. Everything blooms. But the blossoms don’t lack insight. They teach you, even while they laugh at you. They teach you because they’re likely more alive than you are, they’re intensely living things, the characters in this novel are some of the livingest creatures in all of literature. 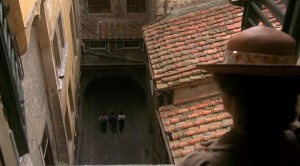 Lucy begins her growing up in a hotel in Florence, Italy. When we meet her, she’s complaining that the rooms she’s been given overlook the courtyard rather than the river Arno.

Mr. Emerson, an old man also staying at the inn with his son, George, offers to exchange rooms, reasoning that “Women like looking at a view; men don’t” (I, too, like my maxims short, true, and sexist). Feel free to skip ahead here, but this point is crucial for those who care about themes in books: the narrator wants us to know that there are different “views” upon the world. Some are narrow and stifling, others more expansive, facing rivers and pieces of sky. But… is there a perfect view? Suspense!

Lucy is pretty and charming and certainly a little stupid. But we’re persuaded to forgive her because she plays the piano really, really, really well.

In fact, she plays it so well that her talent may take over her entirely and free her from the confines of Edwardian England wherein she finds “most big things unladylike”… UNLESS she marries the wrong guy. Then she’s stuck forever. More suspense!

He’s in love with Lucy, although I’m not sure why, since he’s never heard her play the piano, which is the only “big thing” she’s got going for her.

It’s no coincidence that George’s last name is Emerson. Why? Because he’s a Transcendentalist, of course! The Transcendentalists were into nature, spirituality, independence, and building really small cabins in the middle of forests.  George tells Lucy, very prettily, that “there is only one perfect view – the view of the sky straight over our heads, and… all these views on earth are but bungled copies of it.” Lucy’s brilliant response? “What a splendid idea,” she says. Yes, Lucy, it is a splendid idea. Go play the piano.

So, because George is progressive, liberal, unpretentious, and passionately devoted to truth and because Jesus, who wouldn’t, Lucy falls in love with him. But she doesn’t know it, so she tortures him, herself, the reader, and everyone in the book until we, in frustration, almost stop caring altogether.

But George knows better, so he waits. And waits. And then waits some more. While he’s waiting, there’s a really beautiful chapter, in which George, Lucy’s brother, and a rector swim and play in a lake. It sounds unremarkable, but oh, that chapter is flooded with sunlight. If you have even a little imagination, you’ll want to fling off your clothes and prejudices and to dance, innocent and sublime, on the edge of some abyss or other. Or, at the very least, it’ll inspire you to pick up a copy of Walden. Read it. Do.